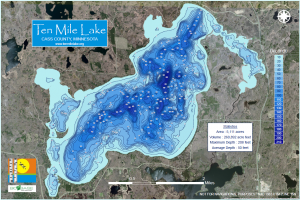 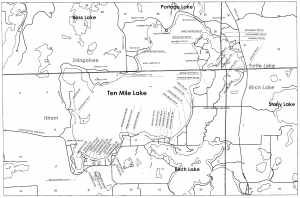 Ten Mile Lake is one of the many Minnesota lakes that owes its origin to the last glacier.  Specifically, Ten Mile is a residue of the actions of the Superior lobe of the most recent glacier that covered northeastern Minnesota.  As the glacier retreated, it left many depressions in its wake.  These depressions became filled with water and formed lakes.  One of these depressions created Ten Mile Lake, which may have originated from the gouging and subsequent melting of a huge block of ice.  Clues to the origin of the ice from the Lake Superior area are the Ten Mile agates that are the type found in the Lake Superior basin.

Ten Mile is the third deepest lake in Minnesota, with a maximum depth of 209 feet.  With a surface area of approximately 5,000 acres, it is considered a medium-size lake in Minnesota.  It is a relatively infertile lake, with high water clarity.  Secchi disk readings often top out over 21 feet.  It is classified as an oligotrophic/mesotrophic lake.  Although the main basin overall is very deep, the lake has five shallower bays, which provide excellent habitat for fish and other aquatic animals.

Because of its water clarity, Ten Mile contains abundant aquatic plant life as deep as 30+ feet.  The shallower waters contain many of the fish species common to most central Minnesota lakes (e.g. pike, bass, panfish, walleyes and perch).  The water below the thermocline is well oxygenated.  This allows the presence of a variety of coldwater fish that thrive in deep water, e.g. whitefish, ciscoes, suckers and large pike.  A unique feature of Ten Mile is an enormous population (5-8 million) of dwarf ciscoes (4-5” long) that commonly live from 60-100 feet below the surface in water of about 46o.  In the evening, the ciscoes follow the migration of plankton toward the surface and then become prey for larger game fish.  This rich source of food plays a significant role in the growth of the game fish that prey upon them. 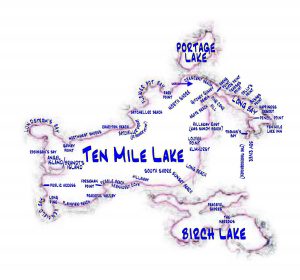 This map was provided by Geoff Cox. Click on the image to view larger map. Please feel free to send me additional landmark information to be included here!