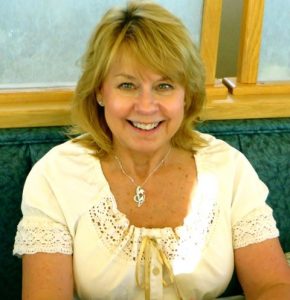 My family (the Chinanders) first came to Ten Mile and bought an old Pebble Beach cabin in 1965.  Then my parents moved two lots down to Foresman Point and built a new cabin in 1970 which seemed luxurious with new showers and a dishwasher and everything!  After I married Michael Schwartz (we met at a dance in Nisswa), we were fortunate to have (with no cost) our choice of the Foresman Point cabin or the Schwartz cabin on Chariton Beach when we returned for the summer from Cornell University  in NY.   We often were back and forth between the two cabins many times each day for skiing,  visits and dinners.

When Mike was hired as an assistant professor at the University of Florida, we were thrilled to move with our 18 month old son from snowy NY to Gainesville, Florida.  Soon after the move, I started law school and received my JD and then my LLM in taxation in 1980.  During our Gainesville years, we had difficulty finding the time to come back to Ten Mile Lake with our two children.  To be closer to family and Ten Mile, we moved to Mpls and built legal careers with large Mpls law firms.  Living in Mpls. allowed me to work with Jim Schwartz to obtain the tax-exempt 501(c)(3) status for the Ten Mile Lake Association in 1985.  Almost 35 years (and an equal number to cruises--we love to travel too) later, we both retired and worked through the complicated process of selling my share of the Forsman Point cabin to my sister and buying out Mike's brother's share of the Chariton Beach cabin.  Then we totally renovated the place to make room for all of our  children, spouses and eight grandchildren.

Both children and all of our grandchildren have manged to travel back to Ten Mile almost every summer and many of them report that it's their favorite place in the world.  We love this lake and are committed to preserving its quality for many generations to come. 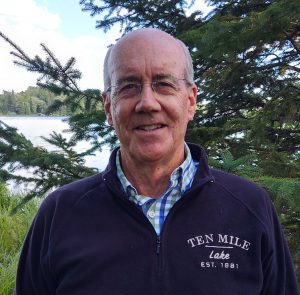 As a youngster, I was introduced to Ten Mile Lake reading the columns of the New Ulm Journal editor, Bill Macklin.  Bill’s weekly summer columns were written from his cabin and extolled the virtues of northern Minnesota and pristine Ten Mile Lake.  In the early 1990s, my wife Anne and I rented a friend’s cabin on Sunset Beach for a week each August.  That led to acquiring our present property in 1993 on Snowberry Trail on the north side of Long Bay.  For the last ten years or so I’ve been a member of the Conservation Committee and currently serve as co-chair with Jim Miller.  I am also a current member of the Northern Waters Land Trust Conservation Committee.

I’m a retired CPA who keeps busy with fishing, teaching at a university as an adjunct faculty, and several other board and volunteer roles.  But even during my working career I maintained an active involvement with nonprofit boards.  I’ve served as board chair of a Chamber of Commerce, a hospital, a K-12 school system and the Minnesota Society of CPAs, among others.  I continue to enjoy working with the great group of volunteer committee and board members who make the Ten Mile Lake Association one of the best in the state.  The best retirement gig of all, however, is having our three kids and five grandkids visit us on beautiful Ten Mile Lake. 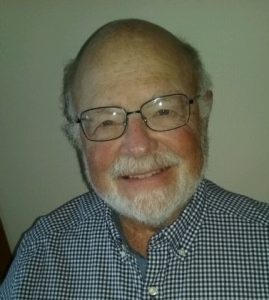 My first trip to Ten Mile was in 1974 with my soon-to-be wife, Lolly  Brandt.  It was love at first sight.  We spent the next 34 years on Angel Island and renting the Moos cabin during our annual trips.  Finally, we got our own place on the south shore in 2008.  I have been on the E&E Committee for the past 10 years and chaired the Adopt-a-Highway Committee for the past 4 years.  Now that Lolly and I are retired from 30+ years of teaching, we spend 5 months at the Lake and 7 months at our winter home in Colorado.  We cherish our time at Ten Mile and love the serenity. 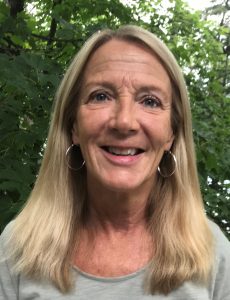 I am kind of a newbie on Ten Mile Lake as we came to the lake in 2007.  We followed our best friends, the Blommes, knowing in our heart that Ten Mile was eventually where we wanted to spend our retirement years.  After thirty-five years in the accounting profession I retired in 2013 and after 59 years in our home town of Marshall, Minnesota we made Ten Mile Lake our permanent residence in May, 2015.   During my accounting career I was a tax accountant and an auditor for ten years including the auditing of several non-profit entities.  My second decade of my career was spent as the accountant for SSU Foundation a non-profit entity I had  previously audited.  The last fifteen years of my working career I was the Finance Manager for the local community utility.  I am married to my wonderful husband, Kenny of 41 years, with three daughters and four beautiful grandchildren.

Bob served as president of the Ten Mile Lake Association from 2020 through 2021. By virtue of this service, he is the current ex-officio board member and part of the advisory committee.